Whilst many were fighting over who was superior- Blur or Oasis, there were many sitting to one side of this musical battle wryly commenting that it was in fact Pulp, that was the better band. Some may have said this just to be different or because they were sick of hearing about Blur or bloody Oasis. However, there was a good point to be made with that statement. Pulp were one of the best bands of the period and for me personally one of all my all time favourite bands. My affection for them started when I first heard Razzmatazz all the way back in 1993 and rushed out to buy the 7″ single. Imagine my joy when I discovered they had already been knocking out tunes since 1983 and there was already quite the back catalogue for me to delve into. But, for me, it was with their 1994 album His ‘n’ Hers that my love for Pulp really peaked. It is still to this day, one of my favourite albums. I was lucky enough to have caught them live several times, but my favourite concert of theirs was when they supported Blur at Alexandra Palace in 1994. I was right at the front and was mesmerised by their performance and Jarvis Cocker’s delectable charm. Whilst, Different Class was a fantastic album, my love for Pulp did wane some from This is Hardcore onwards. 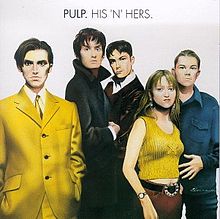 Have a gander at my selected favourite Pulp tunes below and let me know which are your favourite.

and my all time favourite Pulp song is…

The One That Almost Made It: Birds in Your Garden (2001, album track, We Love Life)

All the interchangeable covers for the Different Class album (the three of them dancing was always my favourite).

Don’t forget to tell me your favourite Pulp track below.