Woo-hoo our first book club discussion! Please leave your comments below or within the right book club post on my Facebook page. Please feel free to peruse other people’s comments and respond. Without further ado, let’s get into it.

All the Light We Cannot See by Anthony Doerr

Set during World War II, the book tells the parallel stories of two children, Werner Pfennig and Marie-Laure LeBlanc. Werner is a clever German boy who is bit of genius when it comes to radio engineering and Marie-Laure is a blind French girl in possession of a valuable jewel. Over 200 chapters we witness their lives before the war, the onset of war, what part they took during the war, how their lives finally connect and events after the war. It is a tale of survival, morals and ultimately love. It’s worth noting that it took American author Anthony Doerr 10 years to write this historical novel.

All the Light We Cannot See is so beautifully written it actually incites jealousy. I cannot help, but feel envious of the fact that I would never be able to write as well as this. The way Doerr describes scenes is so vivid, the reader has no problem with imagining them. In particular his description of Saint Malo, the house that Marie-Laure lived in and the bombing that took place there, sticks in my mind.

It was very interesting how the books depicts two different families torn apart by war for different reasons. So often books set during wars, tell the story from an adult’s perspective, so it was refreshing seeing how war affected children from both sides.

I recently visited Eden Camp, a Second World War museum inside an actual old prisoner of war camp, in North Yorkshire. It had a whole section on Hitler’s Youth, so I took a couple of (not very good photos) for you all.

Information on the Hitler Youth 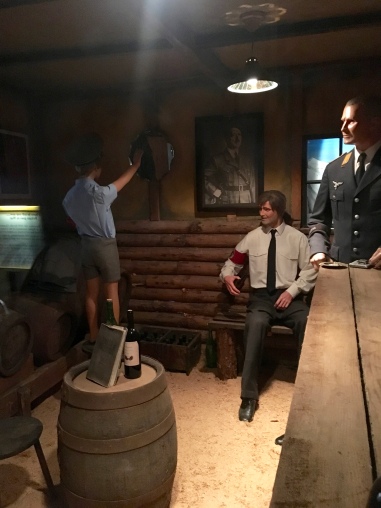 A member of the Hitler Youth saluting a picture of Hitler

The book is made up of very short chapters. This gives the feel of a fast moving book that keeps you interested and makes you keep on turning the pages.

I can’t decide if I’m satisfied with the ending or not. Werner dies, Marie-Laure never finds her Father and the jewel is lost. However, I also feel this is a reflection on the reality of war. There are obviously so many unhappy endings in war and at least Marie-Laure continues on with a happy life.

Lastly, I want to mention the title of the book. Initially, it would seem to refer to two different things in relation to the two main characters. The more obvious one being Marie-Laure who is blind, whose other senses are heightened because of this. It also could be said that it might refer to the radio waves that we cannot see, but bring much light. This is a reference more so of Werner. However, I think the title also has a third reference, in that during something as hideous as a war, there is still much light. It may not be as obvious and would not dominate the discourse surrounding war as much, but nevertheless it is there. Do you have any other thoughts regarding the title?

As much as I loved this book, the story and the writing, I probably wouldn’t call it a masterpiece as many people are.

Whilst reading it, I could clearly imagine and predict this book will be turned into a film. I can’t see any evidence of it happening yet, but there certainly are rumours.

You don’t have to answer these questions in your comments, but they might help to get you thinking about the book or to kickstart the discourse.

1. The book opens with two epigraphs. How do these quotes set the scene for the rest of the book? Discuss how the radio plays a major part in the story and the time period. How do you think the impact of the radio back then compares with the impact of the Internet on today’s society?

2. The narration moves back and forth both in time and between different characters. How did this affect your reading experience? How do you think the experience would have been different if the story had been told entirely in chronological order?

3. Whose story did you enjoy the most? Was there any character you wanted more insight into?

4. When Werner and Jutta first hear the Frenchman on the radio, he concludes his broadcast by saying “Open your eyes and see what you can with them before they close forever” (pages 48–49), and Werner recalls these words throughout the book (pages 86, 264, and 409). How do you think this phrase relates to the overall message of the story? How does it relate to Madame Manec’s question: “Don’t you want to be alive before you die?” (page 270)?

5. On page 160, Marie-Laure realizes “This . . . is the basis of his fear, all fear. That a light you are powerless to stop will turn on you and usher a bullet to its mark.” How does this image constitute the most general basis of all fear? Do you agree?

6. Reread Madame Manec’s boiling frog analogy on page 284. Etienne later asks Marie-Laure, “Who was supposed to be the frog? Her? Or the Germans?” (page 328) Who did you think Madame Manec meant? Could it have been someone other than herself or the Germans? What does it say about Etienne that he doesn’t consider himself to be the frog?

7. On page 368, Werner thinks, “That is how things are . . . with everybody in this unit, in this army, in this world, they do as they’re told, they get scared, they move about with only themselves in mind. Name me someone who does not.” But in fact many of the characters show great courage and selflessness throughout the story in some way, big or small. Talk about the different ways they put themselves at risk in order to do what they think is right. What do you think were some shining moments? Who did you admire most?

8. On page 390, the author writes, “To shut your eyes is to guess nothing of blindness.” What did you learn or realize about blindness through Marie-Laure’s perspective? Do you think her being blind gave her any advantages?

9. One of Werner’s bravest moments is when he confronts von Rumpel: “All your life you wait, and then it finally comes, and are you ready?” (page 465) Have you ever had a moment like that? Were you ready? What would you say that moment is for some of the other characters?

10. Why do you think Marie-Laure gave Werner the little iron key? Why might Werner have gone back for the wooden house but left the Sea of Flames?

11. Von Rumpel seemed to believe in the power of the Sea of Flames, but was it truly a supernatural object or was it merely a gemstone at the center of coincidence? Do you think it brought any protection to Marie-Laure and/or bad luck to those she loved?

14. What do you think of the author’s decision to flash forward at the end of the book? Did you like getting a peek into the future of some of these characters? Did anything surprise you?

15. Aleksandr Solzhenitsyn once wrote that “the line dividing good and evil cuts through the heart of every human being.” All the Light We Cannot See is filled with examples of human nature at its best and worst. Discuss the themes of good versus evil throughout the story. How do they drive each other? What do you think are the ultimate lessons that these characters and the resolution of their stories teach us?

Just a reminder that August’s book is “Hotel Alpha” by Mark Watson. I’ll be starting the conversation for that on Monday 4th September.