I’m currently following the How To Break Up With Your Phone plan as featured in the book (of the same title) by Catherine Price. Last week, I talked about how and why I hate using my phone so much and kicked off the first week of the plan. You can read about it HERE. Now it’s week 2 and here’s what I had to do every day this week.

Day 8- say “no” to notifications

Today, I’m going to tidy all of my apps up into specific folders. The idea of this is to slow down my app usage. It gives me a chance to briefly question how essential my usage of it is. The other reason, is that if you don’t clearing see your little app icons, you are also less tempted to use them and scroll through them. There should be at the most six folder categories that our apps can come under. They are:

Catherine also suggests that if you find your phone too tempting after doing this then to turn it to “greyscale”. You can do this in your settings. It turns everything grey, which then makes your phone less appealing to use. I did this last year and whilst it did effect my usage at first, I actually quickly got used to it and carried on using it as I did before, so I didn’t bother doing it again.

I also, need to edit my menu bar. Email needs to be removed from it and perhaps replace less tempting apps with tool apps.

At the end of doing all this, I was left with a homepage with my life-improving apps, on my second screen were my junk food apps (there were a lot of these and I still haven’t re-added Facebook, Twitter and Instagram that I deleted last week) and on my third page were my occasionally used utility apps in one folder and my undeletables and clutter in another folder. This is what my home page now looks like. I wish I’d taken a “before” photo, but it was full of social media, IMDb, Wikipedia, Amazon and eBay.

Yes YouTube Kids is there, but trust me- it’s not me that uses that

Day 10- change where you charge it. Today, I have to change where I charge my phone at night. Most people charge them in their bedroom and sleep with their phone next to them in bed. This means that people end looking at their phone last thing at night (often delaying when they go to sleep) and first thing int he morning, and possibly during the night if they wake up. This is another area where I’m surprisingly quite good. I don’t have my phone near me at night, BUT it is in my bedroom. I charge it right over the other side of the room. However, this does still tempt me to go on my phone when I get up in the morning instead of jumping straight into the shower and this inevitably makes me late to leave the house. Every single day. So, despite not sleeping with it near me, I still need to change where I charge it at night. Therefore, I’ll be charging it downstairs from now on. The only time I’ll have it near me at night, is when my husband is working away. Catherine strongly advises that you buy a non-phone alarm clock to help remove your phone from the bedroom and luckily I had one already.

Day 11- set yourself up for success.  So today, is all about thinking about what I’d like to do instead of being on my phone and setting myself up, so that I actually do those thing I want to do. So for example, if I want to read in the evening instead of faffing on my phone, I should leave my phone in a different part of the house and make sure my book is nearby instead. Pretty simple stuff. So, as reading more is exactly what I want to do more of, I shall be leaving my phone in another room in the evening. I have to say, today was the day I found my old habits starting to creep back. I think this might be that I’m getting used to accessing social media via a web browser, so I think tomorrow’s task might be good timing.

Day 12- download an app blocker. There are clever apps that you can use that restrict or schedule your apps usage (yes I know- an app that stops you from using apps. Get over it). Even though, I feel like I’m starting to spend a bit more time on my phone again, it’s still a lot less time and I don’t think I’m there yet with needing to schedule when I can use apps, BUT I think it’s a really good idea and I might return to this. What I will do is long out of social media on my web browser though.

Day 13- set boundaries. Today is about setting up physical boundaries when it comes to your phone usage. Thankfully, I have already set some of these up, but I do need to ensure I’m consistently using these boundaries. The dinner table is a no phone zone.

Day 14- stop phubbing. Do you know what phubbing is? It’s short for phone snubbing. It’s when you snub the person you’re with and use your phone instead. I’m very good at not doing this when I’m with friends and extended family, but I am terrible at phubbing both my husband and child. You know, the two most important people in my life. This has to stop now. I need to make myself really conscious of the fact that I’m doing this. Catherine also makes suggestions on how to stop other people phubbing in your company, but I just don’t think I’m brave enough to tell other people to put their phone down when they’re with me. Not yet anyway. I can see it will increasingly annoy me though. So the golden rule with phubbing is that it is not okay to pull your phone out if you’re using it to distance yourself from the people you’re meant to be interacting with. So, maybe you don’t need to check how many likes you’ve got for that photo of your dinner you put on Instagram when you’re meant to be having tea with Aunt Mavis.

So, that’s the end of week 2. Tune in next Monday to see how I get on with week 3. And if you feel like joining in too, comment below on how you’re getting on. 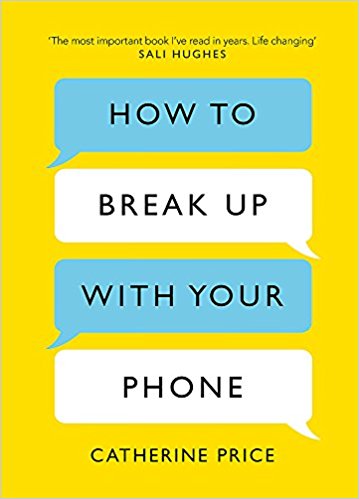