Please leave your comments below or within the appropriate post on my Facebook page. Please feel free to peruse other people’s comments and respond to them. 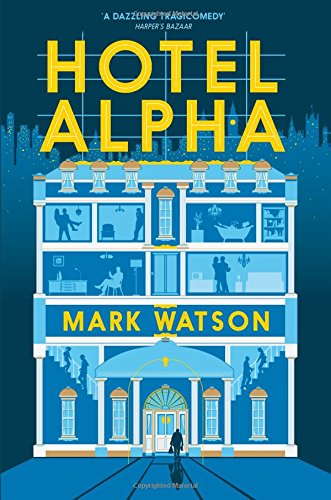 Set in a high class London hotel over several decades, this book is told from two different viewpoints. Graham, a loyal, hardworking and traditional concierge and Chas, the hotel owner’s blind adopted son. Both characters have an idolised opinion of Howard, the charismatic owner of Hotel Alpha. But, is everything as it seems at the Hotel Alpha and is Howard everything people believe him to be?

Written by British stand-up comedian Mark Watson, the book also contains short stories at the end of the book and online about smaller characters from the main story,

To my surprise, I thoroughly enjoyed this book. I’m not sure why I would be so surprised, maybe because it didn’t “grab me” within the first few pages, but I soon found myself turning the pages quite quickly and wanting to learn more about the hotel and the characters within.

I liked Mark Watson’s focus on his characters. This was a book that was both character and storyline led. I do feel the former was slightly stronger than the latter though. Whilst I was gripped by this book and desperate to find out the hotel’s secrets, I couldn’t help, but feel slightly disappointed when I found out these secrets. I had felt that I knew them already and that there wasn’t a shocking “big reveal”. The only true secret that was revealed, was that Lara and Ella were in a relationship, which really wasn’t much of a juicy secret for me. It smacked of “and guess what, she was GAY” shock horror! It was a weak big reveal.

There was also quite a big unanswered question (unless I missed it) with regards to Graham’s future. Was he intending to just leave Pattie at the end? He said he was going off to find Agatha, but never said what was going to happened to his relationship with Pattie? Was he going to leave her, then look for Agatha? Was he going to find Agatha first, then decide if he wanted to leave Pattie? Shouldn’t he have left her a long time ago as the author made it so patently clear that he was unhappy with her? Was Graham after all not-so-perfect as the book liked to depict?

I did like how the ending tied up nicely with finally bringing Graham in to the present. I felt quite affectionate towards Graham’s lack of enthusiasm for the modern age, but it was quite a relief when he relented in the end.

I loved all the historical references and nostalgia throughout the book. Many of which I can clearly remember. However, would the book have had as much of a story without the heavy referencing of them. Did these real life events help the author build his story? This isn’t necessarily a bad thing, but it is something that constantly propped the book up throughout.

Here’s another big question. Should Graham have actually revealed the truth? Is this a lie that was best left untold? And was it selfish of Graham to tell the truth? I can’t help, but think he did it as he couldn’t stand keeping it to himself any more. It was a relief for him. I’m not convinced he did it solely as he believed it was the right thing to do. Perhaps Chas did deserve to know the truth though.

Howard was absolutely an awful man, BUT he did do his absolute best to make amends with Chas. He brought him up as his own son and clearly loved him deeply. This brings me back to my question as to whether Graham should have told the truth. Did Howard deserve this? Possibly. It was the past catching up with him after all, but he did do his best at trying to redeem himself through Chas.

I’m not really sure I saw the point of the storyline surrounding Graham’s son. It did illustrate how technology was progressing and how that affected people’s jobs, but it generally didn’t hold much interest for me. It also irritated me that Graham seemed to go out of his way far more for Chas than he did for his own son. I can see his reasons for doing that at times, but his lack of fully invested parental interest in his own children was annoying. This also backs up my opinion that Graham was not-so-perfect.

It was really interesting to learn through this book what daily support a blind person needs and how much technology helped Chas. Whilst Graham saw technology as something to be resisted and only saw it through a negative light, technology was nothing but a positive presence in Chas’s life. This offered an interesting juxtaposition between the two characters and their viewpoints. This may be seen as an obvious comparison to make, but I still liked the point it was trying to empathise.

I loved the extra short stories at the end of the book. This was a refreshing idea from the author. It illustrated the convoluted nature of relationships and how nothing is as it seems on first impression. Briefly focussing on characters who had a connection with the main characters of the book and telling their stories helped bring Hotel Alpha alive, which after all was the biggest character of the book in the end.

Overall and despite its flaws, I found Hotel Alpha a very enjoyable and readable book that is worth investing your time in.

You don’t have to answer these questions in your comments, but they might help to get you thinking about the book or to prompt a discourse.

1. The Hotel Alpha is full of secrets. Which made the biggest impression on you and why?

2. How would you describe the sense of place in Hotel Alpha, and would you say the hotel becomes a character in its own right?

3. Did your attitude to the characters remain consistent throughout the novel, or did your loyalties shift as you read? Which character provoked the strongest reaction from you?

4. How did the author create Chas’s point of view, given that he is blind and unable to describe things visually? Did you find this effective?

5. ‘In Howard’s own opinion, luck was not a whimsical force which flitted in and out of lives. It was a commodity: something you could make or buy.’ To what extent do you agree with Howard’s view that we make our own luck?

6. How does meeting Kathleen affect Chas and his relationships with others? What did you make of their love story?

7. A pivotal theme of the novel is the rise of technology and the internet. In what ways does the digital revolution aid and thwart the characters?

8. ‘I have heard it said that adversity is the truest test of character, and that the greatest people turn disaster into opportunity.’ Graham is talking about Howard here, but is this also true of other characters? Who else turns adversity to their advantage, and did you find them stronger or weaker for it?

10. ‘I had seen a great many odd sights in the Alpha. That man who broke the door of Room 25, and his wife who hurled her wedding ring up into the balconies; a demonstration of a chemical mixture which, injected into the body of a dead person, could preserve their organs for hundreds of years; the American astronaut who was first to walk on the Moon.’ Some of these incidents, and many more, appear in the one hundred extra stories that accompany the novel and can be found at http://www.hotelalphastories.com. Have you read any of these stories and, if not, do you plan to discover them now you’ve read the novel? What do you make of the author’s decision to continue the story of Hotel Alpha online and how might this affect the reader’s experience of the novel?

September’s book is “Irresistible” by Adam Alter. I’ll be starting the conversation for this on Monday 2nd October.